K2, also known as Chogori / Qogir (Native Balti Chogori meaning ‘Great Mountain’) and Mount Godwin-Austen is the second highest mountain in the world at 8,611 meters (28,251 ft), after Mount Everest. It is located on the border between Baltistan, in the Gilgit–Baltistan region of northern Pakistan, and the Tajik Autonomous County of Xinjiang, China. K2 is the highest point of the Karakoram Range and the highest point in Pakistan.

K2 is known as the Savage Mountain due to the extreme difficulty of ascent and the second-highest fatality rate among the eight thousanders. It is more difficult and hazardous to reach the peak of K2 from the Chinese side, thus it is usually climbed from the Pakistani side. K2 has never been climbed in winter.

Karakoram in Turkish means “Black Rubble”. In 1856 a British officer, Capt. Montgomery, surveyed a number of peaks in the Baltoro region of the Karakoram from a distance of about 200km. He noted a cluster of high peaks and named them K1, K2, K3 up to K37 using the prefix “K” from Karakoram.

In 1861 the area was further surveyed by Col. Godwin Austin who recognized K2 as the highest peak of the range and measured it to be 8619m—only three meters more than its official height (1988) of 8616m.

The route to K2 goes through the Baltoro region of Baltistan. There are several high peaks which rise from the world’s largest temperate zone glacier. Only the highest or more prominent peaks have been named or climbed. An incredible nineteen of these peaks tower over 7600m while four of them are 8000ers.

There are a number of routes on K2, of somewhat different character, but they all share some key difficulties: First is the extreme high altitude and resulting lack of oxygen: in fact there is only one third as much oxygen available to a climber on the summit of K2 as there is at sea level. Second is the propensity of the mountain to extreme storms of several days’ duration, which have resulted in many of the deaths on the peak. Third is the steep, exposed, and committing nature of all routes on the mountain, which makes retreat more difficult, especially during a storm. Despite many tries there has been no successful ascent during the winter.

Request Price and full detail of this tour.

There are no reviews yet. 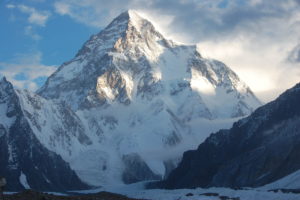