G-II is the 13th highest mountain in the world

Gasherbrum II is located in the Karakoram is the 13th highest mountain in the world is located in the Gasherbrum group mountain region of Pakistan. Many mountaineers looking at a future attempt of K 2, Everest or other mountain objectives on Gasherbrum II as a suitable first-time 8,000 meter peak. G-II stands on the North West of Baltoro Glacier in the majestic neighborhood of K-2, the second highest peak in the world.

Gasherbrum II is one of the highest mountains in the world, posing all the risks that come with such an impressive peak. That being said, the normal route / SW on the mountain is accessible due to less objective hazard. There is a substantial icefall to negotiate on the way to camp one and weather can be very challenging. We plan to utilize an experienced staff, top-notch safety and mountain equipment, fixed rope in exposed or otherwise dangerous sections of the route, and slow conservative acclimatization to minimize our risk.

Gasherbrum-II (8035m) is one of the absorbing peaks among the Karakorum . It is an impressive, ideal peak to start high mountain climbing and the best trek in the world. Although the climb is not as difficult as Hidden Peak, but still considered its climbing provides a perfect mountaineering experience.

The snow-face of the South-West Ridge presents difficulties on ice and snow mixed faces, once you reach above the plateau after negotiating the heavily crevassed Gasherbrum Glacier. It has a steep way up at some sections. Continue climbing on a series of ridges and reach a platform where C II is generally settled up. From here you climb a couple of ice pitches and then up the face going steeper before you reach the site of CIII. After three pitches from there, it is a sloping way across the route from where a traverse leads to the base of the summit on the East Ridge. The climb from there is wide open with glorious surroundings but there is a few steep sections before you reach the narrow summit ridge.

In 1956, the Austrian Karakorum Expedition members Firtz Moravec, Josef Larch and Hans Willenpart made the summit successfully of the South Face (Normal route). In 1984, Reinhold Messner made the historic attempt by continuously traversing both Gasherbrum I and Gasherbrum II with his companion Has Kammerlander.

Day 1
Arrival in Islamabad & Transfer to the Hotel
Day 2
Rest day in Islamabad
Day 3
Fly from Islamabad to Skardu
Day 4
Rest Day in Skardu : Expedition briefing and preparation
Day 5
Drive from Skardu to Askole
Day 6
Trek from Askole to Jhola
Day 7
Trek from Jhola to Paiyu
Day 8
Rest day in Paiyu
Day 9
Trek from Paiyu to Urdukas
Day 10
Trek from Urdukas to Goro II
Day 11
Trek from Goro II to Shagharing
Day 12
Trek from Shagharing to G-II Base Camp
Day 13 - Day 41
Climbing Period
Day 42
Cleaning Up BC: Preparation for descending back
Day 43
Trek from Basecamp to Goro II
Day 44
Trek from Goro II to Khuburtze
Day 45
Trek from Khuburtze to Mundrung
Day 46
Trek from Mundrung to Askole
Day 47
Drive from Askole to Skardu
Day 48
Fly from Skardu to Islamabad
Day 49
Leisure day in Islamabad
Day 50
Fly back to home

Request Price and full detail of this tour.

There are no reviews yet. 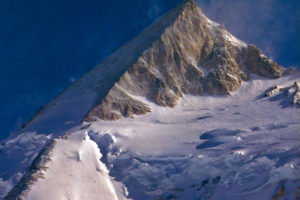