Pakistan is home to some of Asia’s most magnificent landscapes as it stretches from the Arabian Sea, its southern border, to some of the world’s most spectacular mountain Northern ranges and features the densest concentration of high mountain peaks on earth. It features 5 out of the 14 summits that soar above 24000 feet on the face of the earth. 40 of the world’s 50 highest mountains occupy the northern part of the country, where three of the mightiest mountain systems meet. The Hindu Kush, the Karakorum’s and the Himalayas.

Himalayan Ibex are somewhat heavy bodied and thick set even when compared to the other wild goat species, and have short sturdy legs. Mature males have a much paler body coloring with predominantly white or creamy hairs on the flank and rump when in winter coat. Females and young males are a reddish-tan or almost a golden color in summer coat with a greyer-brown appearance in winter, due to an admixture of white hairs. Older males have a rich chocolate-brown color in summer with circular patches of yellowish-white hair in the mid-dorsal and rump regions. The winter coat is dense thick and woolly and cracks like the fleece of domestic sheep. The Himalayan Ibex can be separated from the Alpine population by the horn shape which, in adult males, grows much longer, curving round to form three-quarters of a complete arc and tapering to relatively slender points. The horns of an adult male are large and impressive despite the bulk of the animal and measure average 101.6cm (40 in). Unlike other wild goats there is no distinct white carpal patch on the fore-leg.

Blue Sheep (local name Bharal) The Bharal was described by Hodgson in 1833. Bharal is a Hindi name, while “blue sheep” is a reference to the bluish sheen in the coat. The short, dense coat is slate grey in color, sometimes with a bluish sheen. The underparts and backs of the legs are white, while the chest and fronts of the legs are black. Separating the grey back and white belly is a charcoal colored stripe. The ears are small, and the bridge of the nose is dark. The horns are found in both sexes, and are ridged on the upper surface. In males, they grow upwards, then turn sideways and curve backwards, looking somewhat like an upside-down moustache. They may grow to a length of 80 cm/ 32 in. In females, the horns are much shorter and straighter, growing up to 20 cm / 8 inches long. Once they have been noticed, however, they scamper up to the precipitous cliffs, where they once again freeze, ‘melting’ into the rock face. Bharal are the favorite prey of the Snow Leopard.

Astore Markhor The coat is long and coarse in winter, though with very little underwool, and is much shorter in summer. The male’s ruff is long and flowing. Typically, the horns of Astor Markhor flare very widely just above the base and have one to 1-1/2 twists, with the first turn being very large. They are massive and spectacular, though usually not as long as those of Kashmir Markhor. Most horns within the distribution range of Astor Markhor are of this type; however, horns of Kashmir type with less flare and more twists are also seen. Heads from Baltistan, for example, are of a type between Astore and Kashmir. The best horns of record were taken in Gilgit in 1907 and measured 60-3/4 inches (154.3 cm). 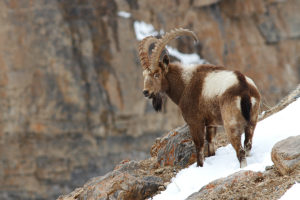 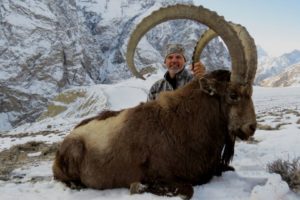 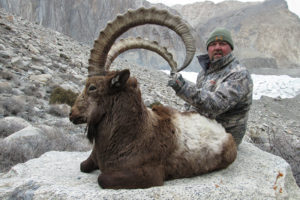